Home > ABOUT US > OUR EMBLEM
Admissions open for classes NURSERY to 8th for Academic year 2021-22.
click here to download the application form 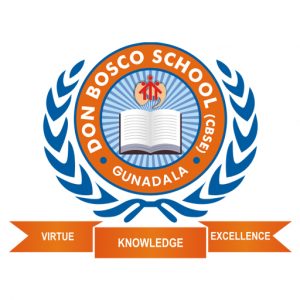 The central idea is that a DON BOSCO / the SALESIANS walking with the YOUNG through the world, TOGETHER achieving a VIRTUOUS KNOWLEDGE-filled EXCELLENCE, gifting them with WISDOM, the goal of HOLISTIC/Integral EDUCATION

The emblem draws inspiration from the logo of the Salesians of Don Bosco and is made up of two superimposed images: in the background a stylized “S” (Salesians) in white is formed within a sphere like a globe marked to the right and left by two cuttings between the hills/dunes The second image is in the center of the globe bridging the “S” road. This is an arrow pointing upwards resting on three perpendicular legs on top of which are three closed circles making a stylized image of three people: the first of these in the middle and taller than the others in the point of the arrow, and the other two (young people) beside it appear as it were to be embraced by the central figure (Don Bosco).

This image is superimposed on the OPEN-BOOK [the symbol and the source of KNOWLEDGE] that ENLIGHTENS/ILLUMINES [represented by the LIGHT] the young, gifting them with WISDOM, the goal of an INTEGRATED, HOLISTIC EDUCATION.

Admissions open for the academic year 2021 – 22 into DON BOSCO SCHOOL for NURSEY to 8th will begin from 1st, January .

Admissions are still in progress.